"Even when hearings were held in the House and Senate, most of those testifying were legislators and officials representing groups such as the Ohio Manufacturers Association and the Ohio Consumers' Counsel.

Citizens, on the other hand, haven't had their say, Leppla said.

'Essentially what we are seeing is that the public is not being invited to testify,' she said. 'It is a really corrupt piece of legislation. It's really important for the public to be heard.'

The fund along with several other groups such as the Ohio Citizen Action, Black Environmental Leaders and Solar United Neighbors have come together to hold the hearings, the first of which was held Wednesday."

learn more about the hearings and sign up at www.ohiocitizen.org/testify

"Along with phasing out the energy efficiency requirement and surcharge, HB 6 guts the state’s renewable portfolio standard. That’s a mandate that utilities get at least 12.5% of their power from renewable sources by 2027. Under the bill, the standard drops to 8.5% immediately and disappears in 2027.

These programs, essential to spurring innovation and investment in clean energy, already were modest compared with those of other states. Slashing them further is an embarrassment to Ohio, highlighting the General Assembly’s shortsightedness and lack of leadership.

Lawmakers can fix that by repealing HB 6 and crafting an energy bill that works for Ohioans rather than for moneyed interests, lobbyists and politicians on the take."

-- The Columbus Dispatch Editorial Board

The nuclear bailout nobody’s talking about

COLUMBUS -- "In February, seven months after Gov. Mike Dewine signed the $1.3 billion ratepayer bailout that mostly would subsidize two Northern Ohio nuclear plants, FirstEnergy might have gotten an even bigger break in U.S. bankruptcy court. That’s when Judge Alan M. Koschik signed off on a settlement that largely excused FirstEnergy from footing part of the bill to clean up the aging nuclear plants in Ohio and another in Pennsylvania that it had bequeathed to to its successor, now known as Energy Harbor, in the event that company goes belly up.

If the new company can’t make a go of it with the nuclear and coal plants that had been owned by FirstEnergy, taxpayers could well be on the hook for whatever part of the estimated $10 billion nuclear cleanup that Energy Harbor and a trust fund it’s required to maintain can’t.

Those are cleanups that, for financial reasons, will take 60 years — decades during which the crumbling cooling tower of the company’s Davis-Besse plant, for example, will loom over the Lake Erie shoreline in view of South Bass Island, one of Ohio’s premier tourist attractions."

"The main reason, lawmakers and observers say, is because – much like congressional Republicans' unsuccessful attempts to repeal Obamacare in 2017 – there’s no consensus among GOP lawmakers on what, if anything, to replace HB6 with.

Some favor a straight repeal of HB6. Others think it should be replaced, and at least a few believe nothing at all should be done to alter it.

'They are all over the place,' said state Rep. Mark Romanchuk of Richland County about his fellow Republicans.

There are other reasons as well. Even Republicans who favor repealing and replacing House Bill 6 say they need time to study HB6, an enormously complex law that goes far beyond the nuclear bailout, and make sure that any changes they make to it won’t have unintended consequences for Ohioans."

If you want to contact your legislator about HB 6, visit repealhb6.com 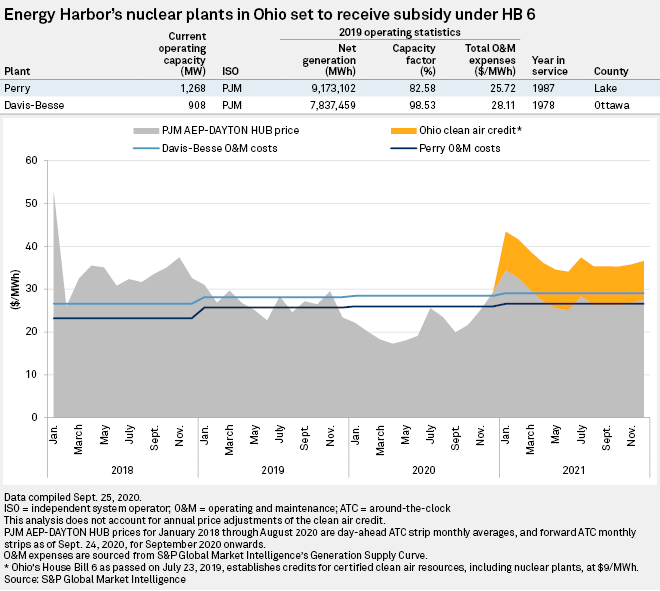 The most recent analysis shows wholesale prices in the PJM Interconnection rising through the end of 2020 and into 2021, which is when Ohio's clean air credit for nuclear plants kicks in.

COLUMBUS -- "Now it’s October. But HB 6 is still Ohio law, thanks to inaction by the Republican-run Ohio House of Representatives. That’s the House once led by Republican Larry Householder, a Republican from Perry County’s Glenford. In July, a federal grand jury indicted Householder and four others on federal racketeering charges, alleging that a $60 million “money laundering scheme” helped pass HB 6. (Householder and the others are presumed innocent unless proven guilty.)

The Ohio House’s Select Committee on Energy Policy and Oversight has been talking about repealing HB 6. And talking. And talking more. Now, though, the panel’s gone home, probably till after Nov. 3′s general election.

Ohio electricity consumers must wonder why the legislature hasn’t already repealed HB 6, given how prosecutor DeVillers described the alleged $60 million scheme to pass the bill: '[It] was bribery, plain and simple. This was a quid pro quo. This was pay to play.'"

(OH-September 23, 2020) -- Today, Ohio Attorney General David Yost announced that the state is filing an injunction to ensure that no entity or individual slated to benefit from any portion of the $1.5 billion bailout awarded to FirstEnergy Solutions under House Bill 6 will receive payment.

This legislation is so steeped in corruption that our state’s Attorney General felt compelled to play legal gatekeeper to prohibit defendants and others included in the FBI investigation surrounding House Bill 6 from profiting. The fact that this action is necessary is not normal. It is not okay. But this is where the Ohio General Assembly has left us.

Even worse, today’s injunction does nothing to keep dollars in the pockets of Ohio consumers. The state will still begin collecting fees from all Ohio electricity customers on January 1st until a final decision is made by the Ohio General Assembly on the future of House Bill 6.

We thank Attorney General Yost for his leadership on this issue. But now it is time for our legislators to stand up and offer this same kind of leadership. Ohioans deserve better than to have their hard-earned dollars sitting in a black hole in the state coffers because their elected officials will not take action.

We call on the members of the Ohio General Assembly to do their jobs. Fully repeal House Bill 6 now. No excuses. Your constituents are watching, and time is running out.

COLUMBUS -- "The Ohio Power Siting Board reversed itself Thursday and agreed in a unanimous vote to remove language from a construction permit the Board approved in May that would have required the nation's first freshwater wind farm to shut down turbines at night eight months out of the year to protect migrating birds and bats.

Project developers called that provision a "poison pill" that made financing impossible and asked for reconsideration while 32 state lawmakers from northern Ohio publicly pressured the Board to reconsider. A draft version of Thursday's decision — circulated earlier in the week and introduced Thursday — had kept the overnight shutdown language.

Siting Board member Mary Mertz, director of the Ohio Department of Natural Resources, offered an amendment before the vote on the draft proposal could be taken, removing the "poison pill" provisions, but allowing the full Power Siting Board as well as her agency to periodically review avian mortality rates rather than relying only on the Board's staff reviews."

COLUMBUS -- "The PUCO’s order is 'a baby step towards the direction of what the Consumers’ Counsel is suggesting,' but it’s certainly not the same, said former PUCO member Ashley Brown, who now heads the Harvard Electricity Policy Group. Ohio regulators have wide leeway in investigating utilities’ activities, he noted, and the order doesn’t foreclose additional inquiries beyond whatever FirstEnergy files in response.

...Even if the rate of return looks OK on paper, one might ask if personnel at the parent and affiliates charged for time related to lobbying efforts, Brown said. Likewise, the utilities’ electric security plans include some cross-subsidies for unregulated activities.

Additionally, from 2017 through mid-2019, FirstEnergy’s utilities collected roughly $440 million from ratepayers for a credit support rider that wasn’t tied to any services for ratepayers. Critics have questioned what the company did with those funds. The Ohio Supreme Court subsequently held the charge unlawful but didn’t require a refund.

'To do this audit correctly, you can’t just look at the accounts' from the utilities, Brown said. 'You have to look at what’s behind the reporting. … It really requires a professional auditing firm that has financial skills and management skills and forensics skills.' And, he added, if improprieties show up, the bigger question is how the corporation and its directors and officers might have allowed them to happen.'"

COLUMBUS - "...The outlook for the bailout to survive remains sketchy as lawmakers, already nervous over public reaction to the revelations made by federal prosecutors, have learned that a proposal by regional grid operator PJM would, in effect, nullify the impact of any state subsidies to a power plant by taking them into account when setting the minimum price acceptable from them in future capacity market auctions.

Veteran utility lawyer, Samuel Randazzo, now the chairman of the PUCO, deflected questions during a legislative hearing this week from Democratic lawmakers wanting to know why the PUCO had to be prodded by the state's consumer advocate to launch its own investigation.

They also demanded to know whether as a lawyer and lobbyist Randazzo or his previous management companies had a business relationship with FirstEnergy. Randazzo provided lawmakers with a broad but detailed overview of the state's utility laws but deflected questions about his former clients during his nearly 50-year law practice in the state.

The PUCO's decision to open a review of FirstEnergy's spending on political campaigns also left the Consumers' Counsel unhappy and critical."